The Sunday Telegraph – Clear The Way For A Quick Sale

Struggling to secure a buyer for his cramped flat, Paul Clements enlists the services of a ‘clutterbuster’ .
It’s that moment in the cycle when the rush to buy and sell accelerates. Except that my flat’s already been on the market for two months, and with barely a sniff of interest. Those viewing it have all said the same thing: “It’s very nice, but isn’t it a bit small?”

Actually, it’s not — it’s just that I could showcase the space better. Enter Vicky Silverthorn, professional clutterbuster, who spends her life sorting out the way other people live. When “stuff” threatens to overshadow your space, she’ll overhaul spare rooms used as glorified cupboards, purge bulging wardrobes and clear the clutter you’ve become blind to, making a lived-in property seem more spacious and easier on the eye. “You want to offer a blank canvas,” says Vicky, who has decluttered the homes of celebrities including pop star Lily Allen. “It’s not about making a place immaculate, just friendly and presentable.”

De-personalising your home to make it sellable is, Vicky says, more difficult than vendors imagine. It’s not enough to hide your family photographs and chuck all the junk under the stairs. “When selling, different rules of tidiness apply,” she says. “You’re not decluttering a place to live in – you don’t want to live here any more.”

Vicky and her team are enablers, coaxing you to “filter” everything, while rearranging unruly shelves and blitzing the paperwork bursting out of kitchen drawers: in other words, “all the places that prospective buyers like to have a nose.”

If you find yourself even thinking about putting stuff into storage, it’s time to declutter. The key is to start a charity pile.

“While I’m never going to tell women to get rid of vintage designer clothes – I wish my mother had kept hers – there’s a knack,” she says. “If you’re finding it hard to let go of something, think about how happy it will make the person who buys it.”

Nick-nacks that mean the world to you will put off a buyer, so souvenir tealight holders bought in India and tin soldiers from childhood should be tidied into a memory box, “a time capsule to keep in a cupboard”.

My wardrobe gets the thumbs-up (“surprisingly neat for a boy – no wire hangers”), but Vicky quickly isolates a prime target for primping: my kitchen work surfaces. It turns out that the artisan bottles of oils and jars of spices tastefully arranged between the hob, microwave, juicer and Magimix are actually eyesores, and the cupboard shelf and its dozen empty glass jars could work harder. 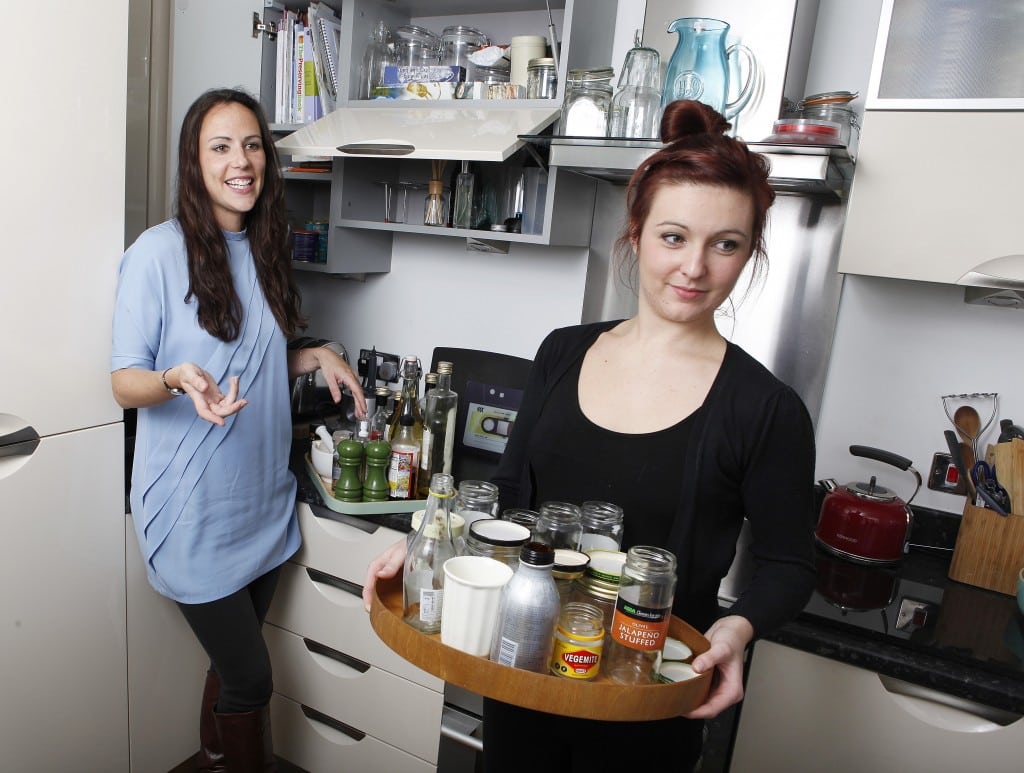 “You’re never going to be short of a jar, so there’s no need to collect them,” she says, scooping all but my favourite (an empty Vegemite jar used for mixing salad dressing) into a recycling bag.

Each cupboard gets a rethink, too – so the “cup-of-tea journey” from spoon drawer to cup cupboard to tea bag caddy to kettle is made more logical. Meanwhile, Vicky’s little helper ditches anything out of date. “My previous record is dried herbs dating from 1998,” she says, with undisguised glee.

Vicky’s eye is also drawn to my bookshelves, a dumping ground for bills and unopened post. To “calm things down”, the contents are placed in the middle of the room and I have to decide what deserves to go back on display. A few dozen paperbacks go on the charity pile – “how often do you reread a book?” – and a focal point is created by positioning the stereo in the centre of the shelves.

Reordering the books by size means they now form a sloping shape. To reduce the impression that this is the home of a geometry obsessive, Vicky turns a few spines the wrong way up. It has a surprisingly pleasing effect on the eye.

“You could even turn all the spines to the wall,” she says, but I’m disorientated enough by this new order for one day.

When they leave, the flat looks immaculate. I’ve fallen in love with it again. Perhaps I’ll take it off the market.